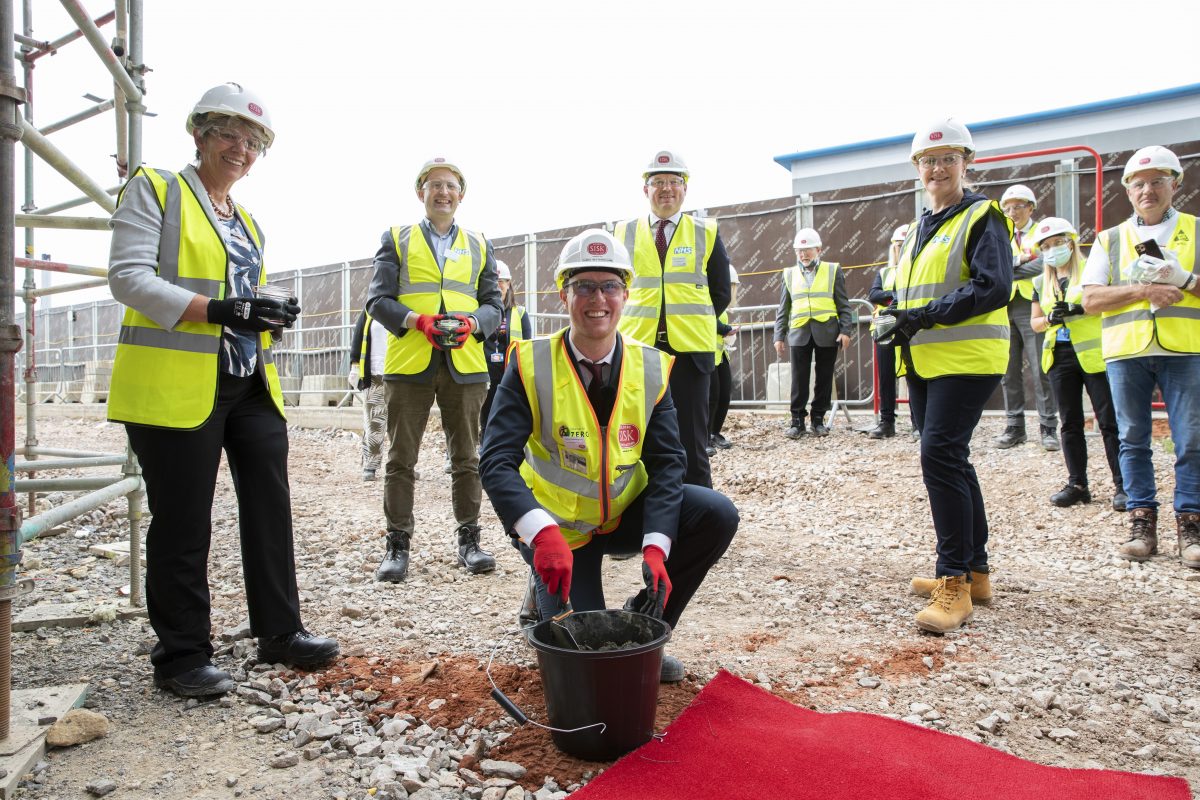 Tuesday 14th September 2021:   The OUH Swindon Radiotherapy Centre, based on the Great Western Hospital site in Swindon, moved a step closer to completion with a topping out ceremony to celebrate the roof being installed.

They were shown around the bunker where the Radiotherapy unit will live, and Jason, Claire, Carol, and Kevin all laid bricks to complete building of the structure. They were also surprised with ceremonial trowels, which they used for the bricklaying as part of the traditional topping out ceremony.

Ajaz Shafi, Managing Director, UK South, John Sisk & Son, said: “This is a significant milestone in the progress of the OUH Swindon Radiotherapy Centre. I am incredibly proud of the teams involved for the excellent work that’s been completed so far, which will benefit so many patients and their families while they undergo treatment.

“These patients will already be going through an incredibly difficult part of their lives, and it’s a privilege to help make this new, hugely important Centre that will be able to bring them more comfort through enhanced treatment facilities and a shorter journey. It’s a fantastic milestone to celebrate, and I look forward to the further progress to come.”

Jason Dorsett, Chief Finance Officer at OUH, said: “The topping out ceremony gave us all the opportunity to acknowledge and celebrate the fantastic progress of the OUH Swindon Radiotherapy Centre.

“Laying the final bricks and seeing the roof in place marks another significant milestone in the development of this hugely important project that will benefit so many of our patients with cancer. I can’t wait to visit again and see the completed project.”

Dr Claire Hobbs, former Head of Radiotherapy at OUH and representing the service, said: “I was here for the ground-breaking in October 2020, and it has been wonderful to see the Centre take shape.

“The OUH Swindon Radiotherapy Centre is all about providing patients and their families a service closer to home that will not only enhance their care, but also reduce travel time and anxiety. I’d like to take this opportunity to say thank you again to all the generous people and organisations that have made all this possible.

Kevin McNamara, Chief Executive at Great Western Hospitals NHS Foundation Trust, said: “Over the past few months we’ve seen the Radiotherapy Centre really begin to take shape on our site and it’s great to reach this significant milestone in an ambitious project that will make a real difference to Swindon.

“This isn’t just a development in a building programme, it’s a really big step forward in bringing radiotherapy to Swindon and giving patients the great care they deserve much closer to home.”

Lisa Utting, Fundraising and Volunteering Team Manager at Brighter Futures, said: “It really does feel amazing to have been part of the Radiotherapy fundraising appeal from the start of this journey in May 2015 and to see the roof be installed is just fantastic, it makes me feel so proud of what we have achieved as a team.

“This means so much to me personally, to my family, and all the local people I have met along the way, who have tirelessly helped bring radiotherapy services to Swindon. We are so grateful to all of our supporters; we owe a massive thank you to every single one of them.”

It is estimated that the new centre will save more than 13,000 journeys to Oxford every year, alongside the anxiety, stress, and time of patients. The OUH Swindon Radiotherapy Centre is an expansion of OUH’s radiotherapy service, currently provided solely from the Churchill Hospital in Oxford.

OUH has invested £18.4 million in this project and local people have donated an incredible £2.9 million towards the specialist equipment needed to provide radiotherapy in Swindon, through Brighter Futures’ Radiotherapy Appeal.

The OUH Swindon Radiotherapy Centre is due to complete and welcome its first patients in early 2022.