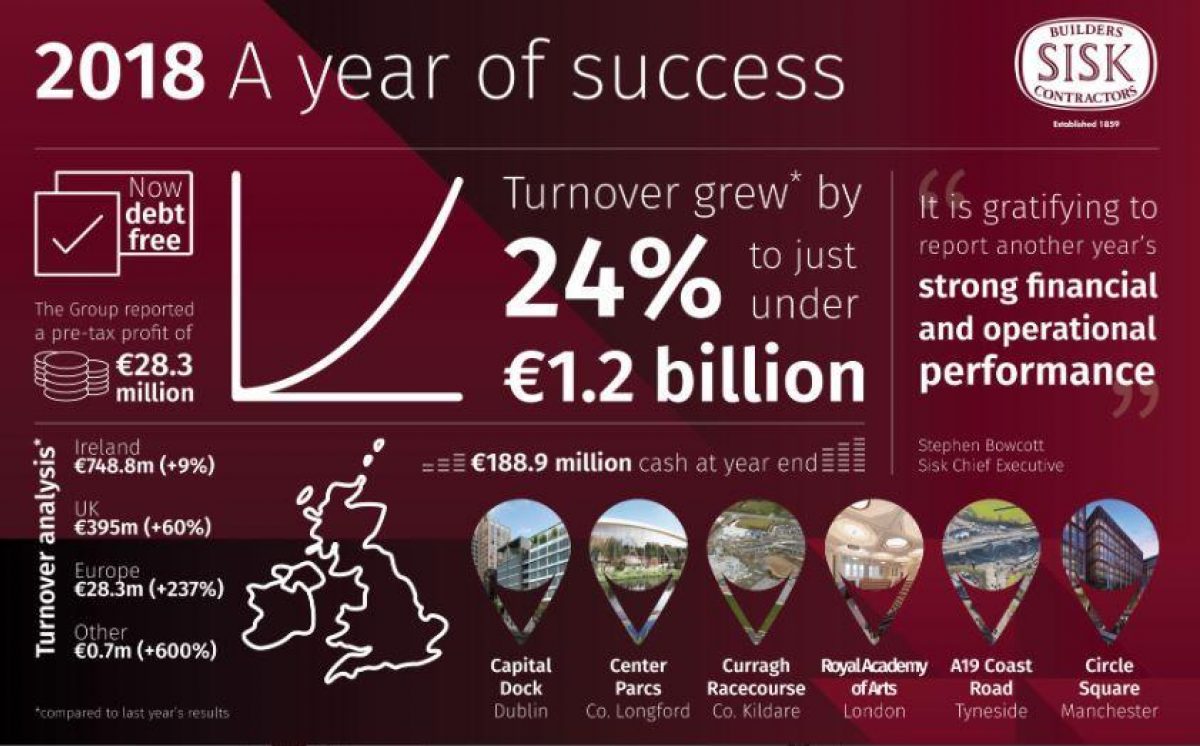 Over 97% of the Group’s turnover are derived from construction activities. The figures below also incorporate the results of the Korine Property Partners and Origo Distribution businesses which are wholly owned subsidiaries of Sicon.

The Sicon Board is pleased to report a very strong set of results for 2018:

The Group is well positioned for the current fiscal year and at this point expects 2019 turnover to exceed 2018.

“It is gratifying to report another year’s strong financial and operational performance for Sisk.  As we celebrate 160 years in the construction business in 2019, we continue to deliver best in class projects for our clients.  The business has an enviable track record of excellence in the areas of project delivery, innovation and value creation in many different construction sectors and markets including commercial, residential, infrastructure data centre and life sciences.  We are also exceptionally proud of the role we play in the delivery of key Irish Government policy objectives in respect of the provision of housing, schools and infrastructure.

“The Irish business is well positioned for 2019 and we have a number of major projects currently underway.  We also expect the Sisk Living team – the social housing unit in Sisk - to build approximately 590 units having recently been awarded the Social Housing Bundle 1 PPP project as a member of a consortium with Macquarie, Oaklee and Choice Housing.  Sisk will also deliver 1,500 additional residential units in Ireland for several other clients.

“In the UK, we have commenced a number of landmark projects such as the tallest residential tower in Birmingham for Moda.  We are also expanding our business in Europe in a number of sectors including data centres and life sciences where we have extensive experience.”

2018 was marked by the completion of and appointments to a number of landmark projects:

Sisk has recently delivered the Capital Dock Development that includes Ireland’s tallest residential building, along with 32,000m2 of commercial space. The mixed-use development, spread across three apartment blocks, brings a further 190 homes to the private rental sector in Dublin.

Sisk made significant progress on the construction of the first Center Parcs in Ireland, having won the contracts for both the accommodation and central buildings of the major project in County Longford.  Sisk will complete 446 lodges, 30 apartments as well as the restaurants, the sub-tropical paradise swimming pool and spa for the opening in 2019.

Sisk Living was established in 2016 as the housing unit within Sisk.  2018 saw the business gain traction with the building of the award-winning George’s Place project for Dun Laoghaire Rathdown County Council and a major development of social housing in Tallaght for South Dublin County Council – a combined total of 102 units delivered in 2018.

Sisk led the construction of the major new spectator stand, entrance and associated bars and restaurants as part of the redevelopment of the Curragh Racecourse in Kildare which was recently officially opened.

Sisk was also extremely active with Johnson & Johnson on the construction of a new major production facility as well as the expansion of its existing warehouse, canteen, laboratories, offices, wastewater treatment plant, central utilities and car parking at its BioCork II facility at Ringaskiddy in Cork Harbour.

Sisk completed a landmark restoration and construction project in the heart of central London for the Royal Academy of Arts bringing together for the first time two listed buildings with a unique link bridge as part of the 250th anniversary celebrations of the Royal Academy.

The A19 Coast Road project in the North East of the UK was a major project for Sisk in 2018 including the construction of a very complicated and challenging triple level junction.  This project for Highways England was completed in the first half of 2019 and is one of a number of Sisk civil engineering projects currently underway in the UK.

2018 saw Sisk’s involvement with Circle Square, a new City Centre neighbourhood in the heart of Manchester’s Oxford Road Corridor innovation district, really gain momentum.  Sisk is due to complete all current contract works on the project, valued at £240 million, which at peak will employ a workforce of 1,300 during 2021.

In Europe in 2018 we continued to be active with Primark, working in several countries.  We also were active for a number of multinational clients in the life sciences sector in Denmark, Belgium, Switzerland and the Netherlands.  We have been working since 2018 on a data centre project for a global tech company and are now on site in Sweden.

In Europe we have established our own supply chain partners and can deliver projects to our clients in a variety of ways ranging from construction management services up to pure contracting.

Korine owns and manages a number of property investments in Ireland, the UK and Europe.  The business completed the purchase of a number of investment properties in Ireland and the UK in 2018.

Origo is involved in the distribution of quality branded products to the Irish retail distribution sector. 2018 was another positive year for the business, which continues its focus on gaining market share, adding leading brands and the tight management of its cost base.