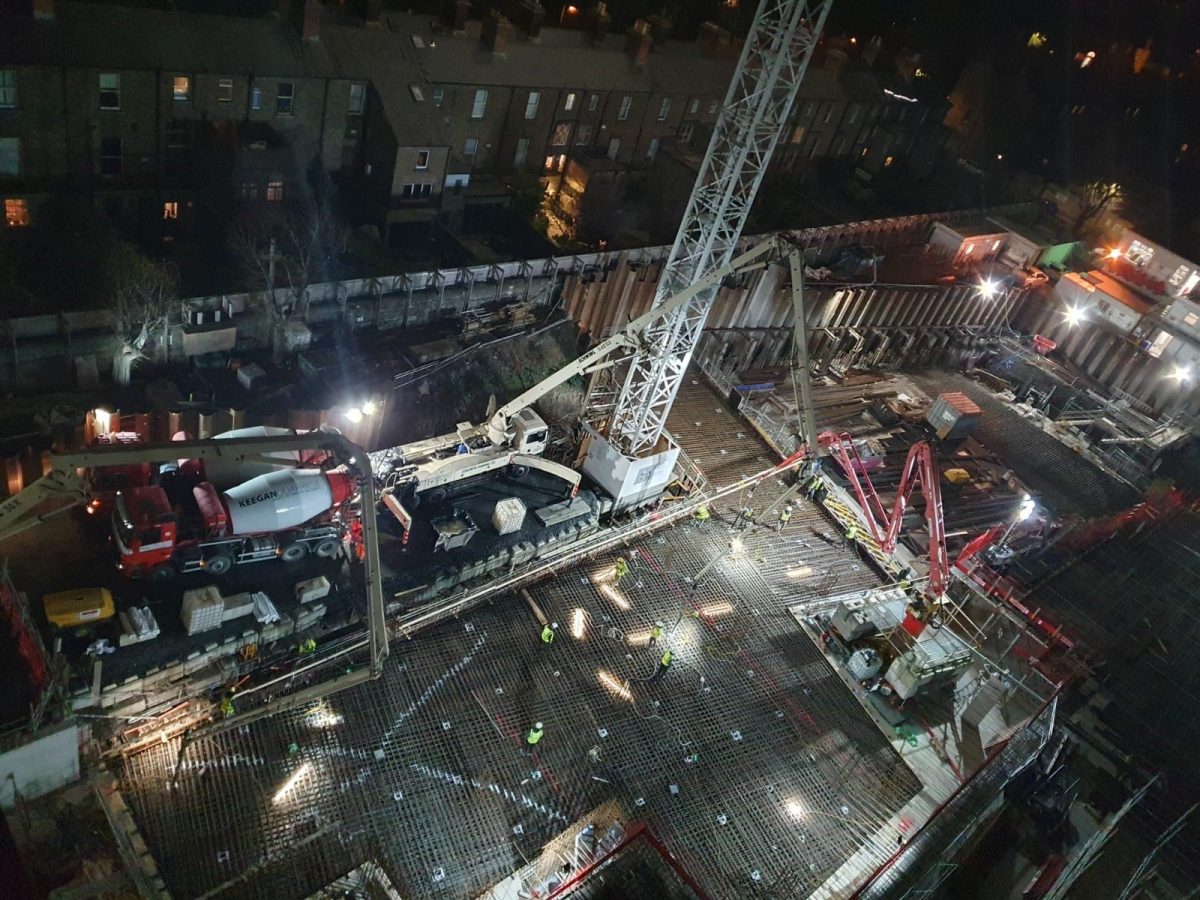 The development comprises of the construction of six storeys of new office space over a single level basement and construction of the roof slab of the future Charlemont Metro Slab and supporting secant piled walls.

The new building is linked via a glass atrium to the 8th storey former headquarters of PJ Carrolls (subsequently Irish Nationwide Building Society) which is a protected structure and overlooks the Charlemont Luas Stop and the Grand Canal in Dublin. This protected structure will also be fully refurbished up to modern office standards.

Mark Ryan, Project Manager, John Sisk & Son said: “The Metro slab was constructed in two mass pours which was necessary due to the constrained nature of the site and urban location. The first pour had a volume of 1400m3 and the second, larger pour had a volume of 1800m3. Both pours commenced on a Friday evening working through the night to be completed by the following Saturday morning. Due to the depth of the slab and volume of concrete poured, careful management of the heat generated was critical which was managed through the development and implementation of a thermal management and monitoring plan."

To facilitate the future Metro Station a void had to be created beneath the slab to allow the slab to deflect due to its own self weight to ensure there is no deflection mobilised during the future construction works to the metro while the building above is occupied. The designers had selected a product to create this void, a clay board product typically used for ground heave. The product is approximately 100mm deep and made up of 2 outer skins of cori-board which sandwich a honeycombed cardboard centre.

Mark added: “The theory is when the water is pumped into the cardboard, the cardboard loses its integrity and collapses creating a void. Sisk did not have confidence in this product for a number of reasons including - point loading from the reinforcement and concrete pour, ability to carry the weight of the slab and water damage to the product during construction which would cause the product to fail prematurely. After many workshops among the site team came up with an alternative solution which was ultimately a simpler, less risky solution that had never been used for this purpose before."

The solution was to lay a bed of ducting surrounded by sand topped with blinding concrete and subsequently split the ducts post the Metro slab achieving strength.

The size and spacing of the duct was specified to ensure the weight of the works above could be accommodated and when the pipes are split a sufficient void will remain to allow the slab to deflect. As with the original solution by the designers, Sisk carried out a site trial which was completed successfully exceeding the required parameters.

A pipe splitter is a trenchless technique to replace failing mains whereby the pipe splitter is pulled through the existing main hydraulically, splitting and displacing the existing main while pulling through a new main. This technique was adapted for the Metro works whereby we sent the connecting rods hydraulically up the duct to the opposite end where the cutting head was connected and then hydraulically pulled back the splitter, splitting the pipe into four pieces as it progressed forming the required void.


Mark concluded: “We would like to thank all of the Sisk team, our client, Hines and all of our supply chain partners for their ongoing commitment to this challenging project.”